Advisory Neighborhood Commission 4A held another marathon meeting this week. Their upcoming summer recess very likely influenced the number of items on the agenda.  I review several of the discussed topics below.

This community is still early in the design stages, so many details may change. The homes are planned to be three stories with roof decks, and all include garages.

The target price of this market rate real estate project is $700,000 to $1 million.  First delivery could be as soon as 18 months from now. This is the third component of the Parks at Walter Reed which will have new, residential units.

Because of the Historic Preservation Review Board’s focus on brickwork and landscaping, this design will need to be reviewed.  The developer is seeking the ANC’s support.

Several commissioners had additional questions, so the ANC will hold a special meeting on June 18th to discuss this further.

At last month’s meeting, the Commission rejected a proposal by the developer to demolish three small buildings on the Walter Reed campus to make way for new infrastructure improvements. The improvements included widening Aspen Street NW from Georgia Avenue to 16th Street NW to add a parking lane and wider sidewalk. The reasons for denying that request included opposition from the immediate neighbors and a desire on the commissioners’ part to receive contracting data from the master developer.

This week the developer returned, armed with a bushel of exhibits that they hoped would show how the community would benefit by replacing obsolete buildings with modern infrastructure.  Development principal Carolyne Kinney also brought the requested contracting report (see below).

Unfortunately for the developer, the Aspen Street neighbors were there as well. And they were not impressed.

There was a meandering, forty-minute-long discussion that rehashed most of the arguments that played out last month. Opposition to the project could be summarized in the words of one commisssioner:

Development principal Caroline Kenney was clearly exasperated.  Public officials often look askance at the cause of historic preservation because some people use it as a means of promoting their real agenda: stopping new development, regardless of historic considerations. In this case, the logic is twisted because the developer is trying to give land back to the city for a long-desired neighborhood improvement.

Developer good will and engineering logic were not going to overcome emotional force on this day.  The commission voted 4 to 4, and therefore the previous decision to oppose the widening stands.

Is Moving Buildings 31 and 84 An Option? 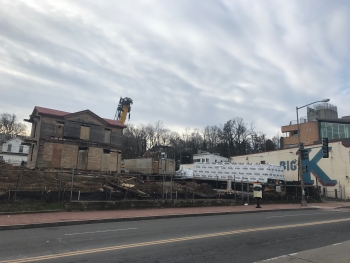 There was a similar situation a few years ago on the other side of Washington, DC.  There were two decrepit two-story homes sitting on a prime development location. These blighted houses were the stuff of nightmares, but they were old enough to be deemed historic, so they couldn’t be demolished.

After the receiving the anticipated rejection from the Historic Preservation Review Board, a contracted expert for Mayor Muriel Bowser’ s administration approved the developer’s plan to move the houses to a nearby city owned lot.  The homes were split in half, reinforced and hauled off to their new site.

Buildings 31 and 84 are significantly smaller than those houses in Anacostia.  I don’t know if this idea would be worth the time, money and effort from the developer, but it is something to consider.  Could moving the sheds over a few yards be a win-win for all parties?

At the request of the Commission, the Walter Reed development team provided this report on current Certified Business Enterprise (CBE) activity on the site.  The commission is dedicated to ensuring that the Ward 4 community benefits from contracting and employment opportunities at Walter Reed.

The provided report indicates that 75% CBE contracting has been achieved and that 54% of new hires on project work have been District residents. Those marks are above what is required by District law.

I am certain that Commission Karrye Braxton and others are going to drill down into this report during their summer beach reading time and have plenty of questions at the next Commission meeting.

Policy Analyst Wesley Dawkins from the District Department of Transportation (DDOT) came to the meeting to present the results from two recent traffic calming studies.  As most of you know, the community messages boards have been on fire with complaints about traffic accidents and vehicles speeding through our neighborhoods. Everyone wants to know what is being done to calm traffic on their block, yesterday.

Mr. Dawkins reported that only two of the four areas he was asked to review had records of traffic calming study applications:

Neither site met the condition to the warrant the installation of speed humps.  In order to install speed hump(s) on a particular street, that street must meet the following criteria.

For more information on how to request a Traffic Calming study on your block, visit this site.

May 7, 2018 Christopher Alexander No Comments